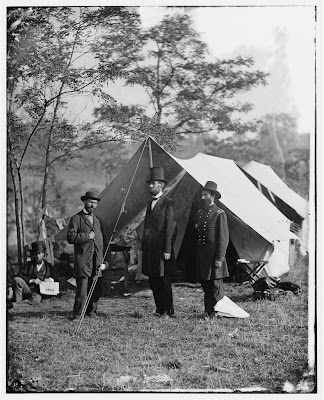 Allan Pinkerton, President Lincoln, and General John A. McClellan
Antietam, October 3, 1862
.
Union Accounts:
.
Battle oh horrid battle. What sights I have seen now see around me. I am Wounded! And am afraid shall be again as shells fly past me every few seconds carrying away limbs from trees and scattering limbs around. Am in severe pain. Furies how the shells fly. I do sincerely hope shall not be wounded again. We drove them first till they got sheltered then we had a bad place. Oh I cannot write.
Sgt. Jonathan Stowe,
15th Massachusetts Infantry, 2nd Corps
Diary entry, Sept. 17, 1862,
CWTI Collection, USAMHI
*
You may call the feeling fear or anything you choose. I don’t deny that I trembled and wished we were well out of it. I tried to do my duty and am satisfied. I came off the field side by side with Col. Beach. Afterward we led the remnants of our own regiment and the 11th [11th Connecticut] on to the field again through as hot a fire as I saw any time during the day. So far as my experience goes, I should not be sorry to see the war ended tomorrow without firing another shot, and yet I am a little eager to see one more battle. Not from any reckless desire for the excitement, but I have a little practical knowledge now and I think I should be more at home next time and perhaps do better. I should be considerable cooler, I have not doubt.
Adjutant John H. Burnham,
16th Connecticut Infantry
Letter to mother and family, Oct. 4, 1862,
State Archives, History and Genealogy Unit,
Connecticut State Library
*
What a bloody place was that sunken road as we advanced, and the Irish Brigade fell back; the fences were down on both sides, and the dead and wounded men were literally piled there in heaps. As we went over them in crossing the road, a wounded reb made a thrust at me with his bayonet; turning my head to look at him, I saw that he was badly hurt, and continued on. As we pushed forward into the cornfield [Piper Cornfield] beyond the road, Private charley Spencer in the front rank just before me, went down with an awful cry; stooping over him as I passed I saw that he had fallen forward on his face and was motionless. Just then a strand of canister went over our heads, and that was my dread; I could endure rifle bullets, but when the big iron bullets went swishing through the air with a sound as though there were bushels of them, it made me wish I was at home.
Charles A. Hale,
5th New Hampshire Infantry, 2nd Corps
“The Story of My Personal Experience at the Battle of Antietam,”
John R. Brooke Papers,
Historical Society of Pennsylvania
.
Confederate Accounts:
.
Tired and sleepy we still march on, and as we come in proximity of the battle ground the scores of wounded passing to the rear remind us that bloody work is going on. A little further on, to the left of the pike, we halt & “load at will.” No sooner done, then in again. The enemy’s batteries give us shot & shell in abundance causing many muscular contractions in the spinal column of our line. But all the dodging did not save us. Occasionally a shell, better aimed than the rest would crash through our line making corpses & mutilated trunks.
James J. Fitzpatrick,
16th Mississippi Infantry,
Richard H. Anderson’s Division, Diary,
Eugene C. Barker Texas History Center,
University of Texas at Austin
*
Just then, a Yankee horseman waved his hat at us, and Col. Tew returned the compliment. It was the last I saw of the colonel [Tew was killed in the ensuing engagement]. Our skirmishers began to fire on the advancing line, and we returned to ours. Slowly they approach up the hill, and slowly our skirmishers retire before theirs, firing as they come. Our skirmishers are ordered to come into the line. Here they are, right before us, scarce 50 yards off, but as if with one feeling, our whole line pour a deadly volley into their ranks – they drop, reel; stagger, and back their first line go beyond the crest of the hill. Our men reload, and await for them to again approach, while the first column of the enemy meet the second, rally and move forward again. They meet with the same reception, and back again they go, to come back when met by their third line. Here they all come. You can see their mounted riders cheering them on, and with a sickly “huzza!” they all again approach us at a charge, but another volley sends their whole line reeling back.
Lt. John C. Gorman,
2nd North Carolina Infantry,
D. H. Hill’s Division
Letter to wife and mother, September 21, 1862,
North Carolina State Archives
*
We have again lost some of the noblest men in the south. The wounds generally in more of a serious nature than heretofore. I pronounce this battle to have been the most terrible in artillery than any one of the preceding fights. I never was so tired of shelling in my life. I hate cannons.
Dr. James Boulware,
6th South Carolina Infantry,
D. R. Jones’s Division
Diary, Virginia State Library
Posted by Bugzita at 7:19 PM