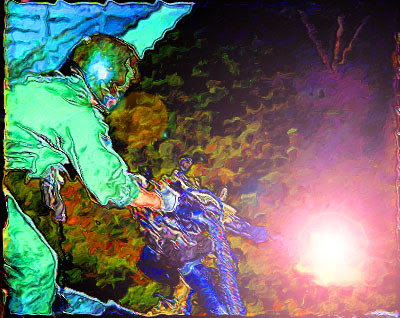 (A U.S. Air Force HH-3 helicopter crewman fires a mini-gun during rescue patrol
over South Vietnam, 10/17/1968)
_________________________
.
When Lou came to our outfit, fresh from Viet Nam,
He was just another helicopter jockey
Back stateside from his stint as an
Advisor to a war no one was fighting,
And he didn't talk much to anyone
Except when he drank.
Every afternoon in the second-floor
Officers' Club, he'd explain MAAG Viet Nam.
The Vietnamese he'd met liked Americans
Better than they liked the Viet Cong.
After they blew up the villages and bridges, the
Americans returned and built new, better bridges.
But now Lou was back in our world and
Doing just fine, thank you, helping defend
Dallas's suburbs against bomber attacks.
Except sometimes he'd thrash out in the night
Against his wife, Pam, who in dark dreams looked
Like Charlie. And sometimes, he'd jump at
Loud noises on TV. And sometimes, when we flew
Over to Delta Battery, he'd drop to tree top level
As we cruised over old Highway 80 between
The Texaco station and the diner, keeping his
Approach to the side of the red brick road,
Shielded by pines from hostile Texas mortar fire.
.
__________________________
.
Jerry Siegel, a three-time Fulbright scholar, teaches literature and writing at York College of Pennsylvania. He is also the husband of the webmaster.
.
--------------------------------------
.
We would like to read your war stories, poems, and essays and, possibly, even post them in this blog.

This comment section is reserved for work having to do with the VIETNAM WAR.

If you submit your work in the comment section, we may even elevate it to a post.

In any case, we will likely leave it in the comment section.

Previously published work welcome.
Posted by Bugzita at 12:47 AM