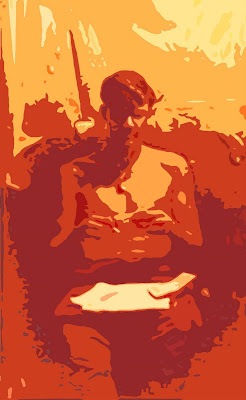 Dear John
.
Cool
along the jungle trail
alert to lurking danger
manhood gentlefierce and poised
for any crisis on the path.
.
Animated
in a makeshift bar
exuberating joy
expanding through the
evening camaraderie.
.
Reverent
before ground made sacred
by spilled blood
by tried valor
and steel-forged meaning.
.
Stunned now
angry
helpless
bits of torn paper beside
empty red mailbag.
.
–Jackson H. Day, An Khe, 1969
Dear Peter
.
On the way home from the airport, Lyle, Colleen, Jerry, and I stop off at the WinnaVegas casino, a yearly ritual that officially opens our two-week Sioux City vacation, a pause before beginning my journey to Cherokee and then Skopje, Macedonia.
.
There is something soothing and rhythmic about dumping money into a slot machine, even though I'll eventually lose my $20.00.
.
I hit a small jackpot on a nickel machine. "I am Neptune, and I grant you great fortune," warbles a naked sea-man swimming with a pack of dolphins positioned over his vital parts.Playing slots is something I do in Iowa; it's soothing and comfortable. I rarely win anything over $50.00–mostly I lose.
.
An unlikely person haunts me: Peter Raskin, a Marine from Sioux City serving in Vietnam who asked me in a 1968 letter to marry him.
.
I accepted.
.
I didn't love him–I, a flighty 17 year old who failed to consider consequences, loved the idea of being married. No sooner had I mailed my acceptance, I regretted it and spent the rest of the summer and fall plotting ways to undo it. But I had boxed myself in.
.
Soon a small box with an engagement and wedding ring from Sears arrived in the mail. I considered going through the wedding anyway: as atonement for my sin.
.
I can't do it! I have to tell him!
.
But every time I sat down to write the Dear John letter, my blood ran cold. I had heard horror stories about soldiers stepping on land mines after receiving breakup letters.
.
Peter made arrangements for me to fly out to Hawaii during his R&R in December so that we could marry.
.
I wanted to wait two years.
.
He wanted to marry by Christmas.
.
No, I wasn't ready."I-want-to-get-married-by-Christmas."
.
"Two years!"
.
"NOW!"
.
"LATER!"
.
So we quarreled, back and forth, via the U.S. Mail.
.
Writing a Dear John: unthinkable. Even if I couldn't support the war, how could I do such a despicable act to a man fighting for our country? Yet how could I continue leading him on?
.
Just before moving in with Stoney, I had no choice: I dashed off the letter. I don't recall exactly how I broke the news, but if my other letters of that time offer any clues, it was probably an artless piece of prose, to-the-point blunt.
.
Peter's response was tepid, not at all what I had expected, which scared me even more.
.
"It's okay," he wrote.
.
"Should I send the ring to your grandmother?"
.
"Keep it," he answered. I was going to send it back anyway, but when I left for Sioux City, I abandoned it at my mother's. I never saw it, or Peter, again.
.
This isn't a cautionary tale; Peter did not throw himself on a mine or step into the line of fire. He made it through the war and eventually married a woman from Michigan. As far as I know, he's still alive.
.
Not too long ago, I searched the internet for some Dear John poems written by soldiers who served in Vietnam; most of the poems seemed trite and predictable, but Jackson Day's "Dear John" felt genuine and plausible, the emotion raw, yet somehow reassuring in that the speaker didn't kill himself. I needed reassurance more than I needed art.
.
I showed the poem to my husband Jerry.
.
In one of life's coincidences, it turns out that Day had been Jerry's college roommate. Real life is funny like that, but don't try this in fiction.
.
If anyone asks if I regret any one thing in my life, accepting Peter's proposal would be it, one act I would undo in a blink. Other than that, I'm at peace with my past, even Stoney.
.
The slot machine siren goes off, along with flashing lights and a slot character's unwavering voice:
.
I am Peter, and I grant you complete absolution.
.
________________________
.
(During 1968-1969, Reverend Jackson H. Day served as a Chaplain in Vietnam. He currently lives in Columbia, Maryland, and serves as a Pastor at Grace United Methodist Church, Upperco, Maryland)
.
"Dear John," Copyright 1997 Jackson H. Day. All Rights Reserved. Poem posted with permission.
.
"Dear Peter," from Jennifer Semple Siegel's I, Driven: memoir of a teen's involuntary commitment, copyright 2007.
Posted by Bugzita at 1:12 PM